We make your OEM connection fly!

We don't know what the mobility of the future will look like. But without us, it will stand still! Our ready2use OEM processes enable the rapid implementation of specific OEM requirements directly in your SAP system. 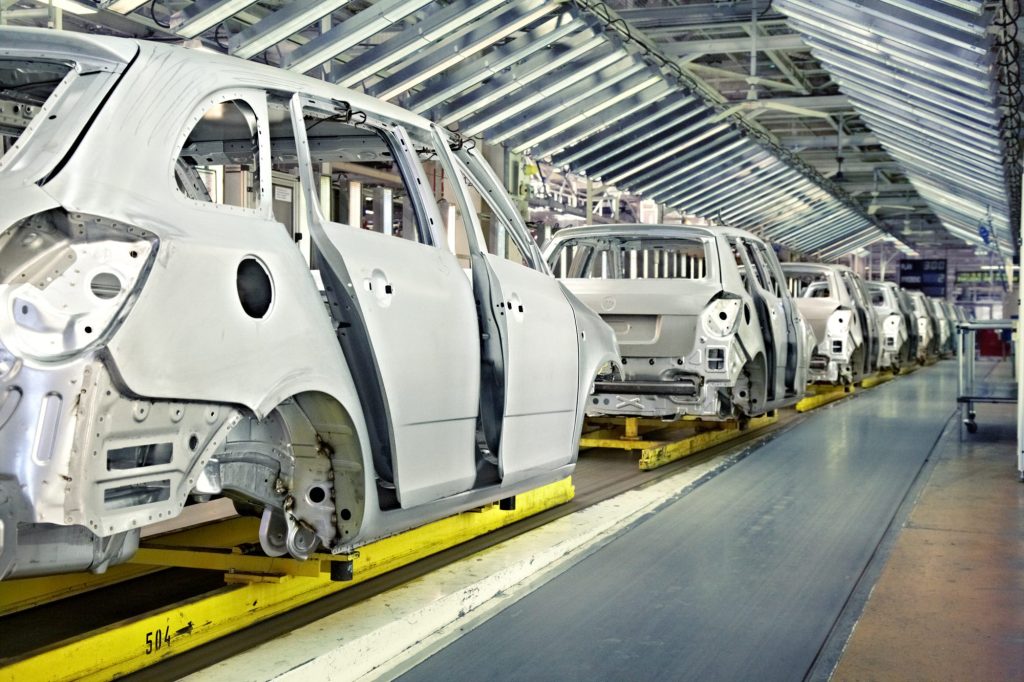 We support numerous special processes of most OEMs. You want to find out if there is a suitable process for your requirements? Here you will find an excerpt of supported requirements, sorted by OEM.

In the "Audi NLK Pearl Chain", the automobile manufacturer Audi combines the requirements of the "Audi Pearl Chain" in JIS processing and the "New Logistics Concept" (NLK) of the Volkswagen Group. The NLK implements the principles of the production system - cycle, pull, flow, perfection (= zero defects) - in logistics. Suppliers must therefore map the "pearl chain" and the "New Logistics Concept" (NLK) in their SAP system.

Daimler has improved its EDI processes in the course of the project INTOSC (Inbound Transparency and Optimization in the Supply Chain) has been expanded. Daimler suppliers who provide parts and components ready for pickup in the sense of Ex Works (EXW) now also receive a pickup sheet (PUS) from this OEM in addition to the delivery call-off in accordance with VDA 4985 (DELJIT), which contains the exact requirements including pickup and delivery dates. This means that the suppliers have to transfer all the information from the PUS correctly into their IT or SAP system and at the same time switch to a different scheduling agreement type.

With the SPEEDI-Package for Daimler INTOSC Daimler suppliers using SAP software can transfer all information from the PUS completely and error-free into their SAP system, which processes it smoothly, displays it, and makes it available in the EDI shipping notifications. For this purpose, the PUS according to VDA 4985 is converted into a DELORD IDoc. The data transfer is carried out with the help of special mappings from WSW Software for SPEEDI.

If, in the course of a new creation of the scheduling agreements, changes to the contents, for example to the outline agreement number, are also to be transferred, the SPEEDI"Mass update of sales documents" is the right choice.

Daimler wants to automatically register delivered components with RFID technology in incoming goods. There are two different scenarios: On the one hand, Daimler provides suppliers with special load carriers (SLT) that are equipped with RFID tags and contain an ID number by which the SLT can be clearly identified. On the other hand, an RFID tag is attached to the back of the goods tags (VDA 4902 label) for the universal load carriers (ULT), which must be written with the ID of the associated load carrier.

With the solution SPEEDI Daimler RFID, suppliers to Daimler who use SAP ERP or SAP S/4HANA can map the requirements for RFID processes consistently in their SAP system. Our solution supports work with both special load carriers and universal load carriers.

SPEEDI Daimler RFID integrates the IDs contained on the RFID tags for the SLT directly into the designated field on the electronic delivery bill. For ULT generates SPEEDI Daimler RFID automatically generates the IDs for the labels that are to be used to describe the associated load carriers according to Daimler's specifications and stores them in SAP HU in the field VEKP-INHALT.

In EDI-supported logistics processes with Hyundai's plant in the Czech Republic (Hyundai Motor Manufacturing Czech, HMMC) and that of the subsidiary brand Kia in Slovakia (KIA Motor Slovakia, KMS), suppliers must observe special requirements with regard to delivery bills and shipping labels. This mainly refers to the delivery note number and the pallet or pallet cage number for the labels, which must be structured exactly according to the common EDI guidelines of these OEMs.

With the OEM solution SPEEDI Hyundai KIA Europe, suppliers of Hyundai Czech Republic and Kia Slovakia who use SAP software can seamlessly integrate the information from the delivery schedules into their SAP processes and create the shipping documents according to the specific specifications of the respective OEM.

The agricultural machinery manufacturer John Deere requires its suppliers to provide shipping labels with additional information in deviation from the Global Transport Label (GTL) according to VDA 4994. Depending on the delivery process, this includes the corresponding order, kanban or sequence number as well as a 2-D data matrix code. Complete and correct labeling and output on printers is a critical factor for John Deere suppliers.

With SPEEDI suppliers of the agricultural machinery manufacturer who use SAP software can process the special specifications of this OEM with regard to labeling as well as the printing of its labels with end-to-end IT support in this ERP system.

Suppliers to the U.S. electric vehicle startup Lucid who use SAP software cannot satisfactorily handle their EDI-supported logistics processes with this OEM and the associated information exchange requirements with standard SAP functions. In the case of feedback messages, the standard also does not offer the option of incorporating them directly into the SAP system.

The new OEM solution SPEEDI Lucid from WSW Software, which extends the SAP standard seamlessly and without modification, closes these gaps. SPEEDI Lucid integrates information from delivery schedules and JIT delivery schedules as well as individual orders in EDIFACT format (DELFOR / DELJIT / ORDERS / ORDCHG) including the additional data (e.g. the individual "Release Number"), which this OEM transmits to the supplier, directly into the SAP processes. This applies in particular to the feedback messages: the CONTRL confirmation of receipt of the EDI message from the supplier, the APERAK message for acknowledgement including error message and the RECADV confirmation of receipt.

Nissan uses different EDI message formats for almost every plant in Europe and in the Americas; shipping labels also vary from country to country and depending on the delivery process. Common to all Nissan processes is that delivery schedules contain a Release Authorization Number (RAN), which the supplier must incorporate into the SAP delivery schedule and report back on the shipping notification and labels.

With the OEM solution SPEEDI Nissan RAN, suppliers using SAP software can integrate and visualize Nissan delivery schedules including RAN and the additional information transmitted with them in their SAP processes. This enables end-to-end IT-supported and largely automated delivery schedule processing in line with Nissan's requirements.

Like its parent company Volkswagen, Porsche is gradually converting its time-slice-oriented EDI-supported logistics processes with suppliers to global EDIFACT formats. Porsche transmits the data in delivery and JIT delivery schedules in accordance with VDA 4984 (Global DELFOR). In accordance with Porsche's EDI guidelines, the supplier must return this information in the "new" VDA-4987 shipping notifications (Global DESADV) and in all shipping documents. For suppliers using SAP software, the SAP standard does not offer any functions for mapping these process peculiarities at Porsche.

The OEM solution provides a remedy here SPEEDI Porsche from WSW Software, which extends the SAP standard without modifications. With this SPEEDI-solution, suppliers to Porsche handle the special process requirements of this OEM with regard to the time slice, the global EDIFACT formats and the shipping documents with end-to-end IT support and thus efficiently and transparently in SAP.

At the PSA Group (Peugeot Citroen), requirements regarding logistics processes with suppliers are laid down in the "Manuel Logistique PSA (MLP)". With PSA CORAIL, the PSA Group uses a special variant of the EDIFACT message type DELJIT for delivery schedules. A special feature is also the "code route number" for controlling pallets at the cross dock. The SAP standard does not map the special process features of PSA.

With the solution package SPEEDI PSA Caldel, PSA suppliers using SAP software can seamlessly integrate and visualize information from the PSA delivery schedules, together with the code-routing additional data, into their SAP processes. This enables IT-supported and largely automated process handling in SAP ERP in accordance with the requirements of the PSA Group. This starts with the integration of information from forecast delivery schedules and JIT delivery schedules including pick-up date, CORAIL order number and consumption point per schedule line into the SAP scheduling agreement and extends to the output of the shipping notification and the correct labeling of the labels and forms.

Renault and Dacia are standardizing the identification of deliveries in Europe with the CINDI (Common Identification Number for Delivery Improvement) procurement process. CINDI is intended to increase delivery reliability, facilitate follow-up deliveries, prevent advance deliveries and enable goods to be received without quantity checks for certain parts. To this end, Renault / Dacia provides delivery schedules with a RAN (Release Authorization Number), which suppliers must incorporate into the SAP delivery schedule and report back in the EDI delivery notification or on a paper delivery bill. In addition, Renault-Nissan is currently restructuring transportation processing with its suppliers, who will receive three DELJIT messages in the future.

Renault-Nissan is restructuring its transport processing and will in future send three EDI messages (DELJIT) to its suppliers. The first, containing information on the unloading and consumption point, the RAN numbers, but without the transport ID, is sent to the supplier at least three days before delivery. The second, containing only the RAN numbers, he receives two days before pickup at eight o'clock as a forecast for transport (OTMFORE). The third message, the fixed dispatch call-off (OTMFIRM), which contains the transport ID in addition to the RAN numbers, is sent by Renault-Nissan at 2 p.m. on the same day.

Suppliers to the US electric car manufacturer (SUV / pickup) Rivian Automotive have the choice of handling EDI-supported communication with this OEM via the global EDIFACT format or via the US EDI standard ANSI X12. Rivian suppliers using SAP software, the SAP standard does not provide a way to satisfactorily map the associated requirements.

Suppliers to the U.S. electric car manufacturer Tesla must meet very specific requirements in terms of the design of shipping labels. Tesla is the only OEM to date that requires shipping labels to include a Big QR Code. Another special feature of this OEM is that, in addition to labels with the package ID (license plate), the supplier must also create a so-called content label with a content label ID.

With the OEM solution SPEEDI Tesla, which extends the SAP standard seamlessly and without modification, Tesla suppliers using SAP software can meet this OEM's specific label requirements. A separate SPEEDI-function (routine) of WSW Software ensures that the content label ID is generated automatically.

When Volkswagen OTLG (Original Parts Logistics) orders spare parts that a supplier delivers directly to drop shipment customers - sales centers in Germany as well as selected importers - it first sends a delivery preview. Delivery is then initiated by shipping order (EDIFACT DELJIT / CALDEL). In addition to standard data - quantity, date, address - this contains a wealth of additional data that the supplier must report back in the shipment document (VDA 4939) and in the shipping notification (EDIFACT DESADV) and print out on the VW goods tags as prescribed.

With the SPEEDI-With the solution VW OT Route, suppliers can map this special route process, which is not covered by the SAP standard, consistently in their SAP ERP system. This SPEEDI-The solution contains all the functions required to carry out the VW OT special process route with end-to-end IT support in SAP ERP and to correctly process all the information that must later also be found on the shipment document and the VW goods tags.

An excerpt of our customers

Previous
Next
Get in touch with WSW
For those who want to know more.

You want to know more about our services or products or have questions that our website could not answer? Then we look forward to talking to you!